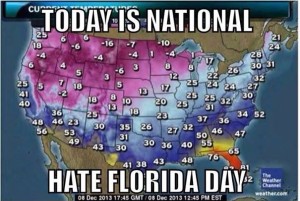 My husband and I have been wanting to go to an art museum to see a Georgia O’Keeffe exhibit, but we keep opting to do things outdoors instead, because the weather is so nice here.

What do you want to do this weekend?

We should do the Georgia O’Keeffe thing.

Or we could walk to the auto parts store.

Mind you, we don’t need any parts for our auto and even if we did we wouldn’t have the slightest idea what to do with them, but the walk is nice and the weather this weekend is supposed to be – as the weather guy so meteorologistically put it once – flipping gorgeous.

If we never get to see the Georgia O’Keeffes, it will be because we have family in Ohio. Because while the weather here in San Francisco is pleasant, it’s still windy, chilly at night, and you are constantly applying and removing layers of clothing at every turn. But because our blood relatives are freezing their behinds off in the frozen tundra that used to be the Midwest, we feel obliged to appreciate our own weather if it kills us.

I lived in Ohio a long time and I have my share of stories about frozen feet, frozen car door locks, and a frozen furnace exhaust vent which shut down the heater and subsequently froze our collective asses off. Our doorbell froze once, forcing me to break into our house and climb through a basement window. Once, my hair froze.

I lived through the Big Blizzard of 1978, the worst winter storm in Ohio history. It killed 51 people and shut down virtually everything. Temperatures dropped 30 degrees within two hours. Winds were 50-70 miles per hour. We got 28 inches of snow where I was, and the National Guard guy compared the Guard’s mobilization to a nuclear attack.  When it was announced that uh-oh, this looks pretty bad and classes at my university would be cancelled indefinitely, I was in the middle of a dorm keg party and decided to celebrate the spur-of-the-moment winter break by hitching a ride back home to Hubbard with some guys from the party. This put us on the road that even snowplows were like, yeah, we’re not going out in this.

So you could say that I don’t have fond memories of my winters in Ohio. Which is why I have such sympathy for my family and friends who are enduring the equivalent of the Big Blizzard of 1978, except that it’s being stretched out from Halloween to Easter. Like Chinese water torture as opposed to water boarding, the winter onslaughts are getting to be annoying. At least that’s the impression I get from my Facebook friends in Ohio, who are un-friending Floridians like hot potatoes – potatoes that have been lying on the beach too long, as it were. Potatoes that a desperate Ohioan would put into a sock or glove, squish it around and be somewhat comfortable for a few seconds.

Ohioans are getting peeved and I don’t blame them. Meanwhile, when I have to put a sweater on, I keep it to myself. They’re not asking for my advice, but if they did, I’d suggest they find a museum and go see some Georgia O’Keeffes. Her paintings of the Southwest desert at high noon will warm you right up.

← Unfashionably Late ← E-Harmonize With Someone Your Own Age