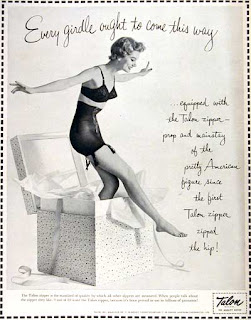 I was standing in line at Macy’s lingerie department earlier this week, buying a pair of big old pajamas, and something caught my eye on a nearby rack.

It was a girdle. I had heard that girdles had made a comeback, like around 10 years ago, but I’ve been busy. Or I forgot. Or I thought that maybe the term girdle was being used extremely loosely. I thought it was just underwear with a lot of elastic thread running through it.

I had to reach out and fondle this girdle on the rack. Yep, it’s a girdle.

I hesitate to write this post. The last time I wrote about a woman’s undergarment and my opinion of it, I was harassed by the pantyhose league. I was writing about how no one wears pantyhose anymore and some pantyhose freak spent weeks vomiting a torrent of pro-pantyhose tweets at me. Being harassed on Twitter is just like it sounds: Like a bunch of birds pecking at you and chirping incessantly. Just when I’d think he was done (I’m assuming it was a ‘he’ but I don’t know why; just instinct. Men can be better at constant nagging. True. Little known fact.) he would come back with an example of someone who was recently seen wearing pantyhose. Paris Hilton’s name came up. Also Kristen Bell. The fact that I don’t know who Kristen Bell is tells you something about how seriously my fashion opinion should be taken.

The thing at Macy’s had a rod running up each side of it, a rod with a circumference of one of those fat pencils that they used to hand out in first grade. I now know it’s called a “bone.” Good grief. Could they make this poor piece of lingerie any less desirable?

Am I supposed to want one? As an over-50 female who can’t figure out how she managed to swallow a fannypack about two years ago, am I expected to buy one? Most importantly, do I have to feel obligated to wear it and still be able to breathe and swallow solids?

The thought of trying to put one on scares me a little bit. I’m not as bendy as I used to be and I’m afraid I’d get stuck with it halfway on and have to call my husband in to help extricate me from it. He’s a nice guy, but I don’t think he’d ever let me forget that. It has Lucy and Desi written all over it.

I thought we were supposed to be happy with our bodies, no matter how saggy, lumpy, puffy, squishy and no matter how many fannypacks we swallowed.

Bringing back the girdle took a near-miraculous PR campaign. From what I can tell, the message is this: Phft! The new girdle isn’t for fat people. It’s for skinny women who want to look like Joan Crawford.

Some quotes from a New York Observer story on the new girdle:

“It’s for the size 4 who doesn’t think she’s slim enough or shaped right.”

“What you will see is somebody who is fit already, putting on one of these things to maybe enhance a little more.”

That settles it: I’m not a size 4, I’m not carbohydrate-deprived, I don’t do Tae Bo, and I’m not “fit already.” The new girdle is not for me. Bring on the big old pajamas.