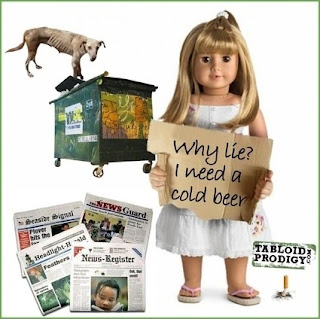 I picked up the paper the other day and found out that there’s a homeless American Girl Doll. Not homeless as in hasn’t-been-sold-for-$95-yet-and-is-still-living-in-the-flagship-store-on-Michigan-Avenue-in-Chicago/Heaven. But as in her-back-story-is-that-she’s-a-homeless-girl-who-gets-made-fun-of-at-school.

Not since JCPenney started using people in wheelchairs as models has a company gone so painfully far to be politically correct and sensitive.

They say they want to inspire all girls so they can overcome adversity and bad situations like being bullied at school and living in your mom’s car, by being as brave and confident as Gwen the Homeless Girl. In other words, if this doll can handle it what’s the matter with you, ya big whiner? If a little squirt who can’t talk or bend her extremities can keep up her self esteem under duress, then you should be able to handle anything your middle school dishes out.

I would love to protest American Girl’s latest product choice by donating all of my daughter’s old American Girl stuff to charity, but it cost the equivalent of a year in a nice college dorm with a meal plan, and I can’t make that kind of statement right now.

We were Round 2 AG fans. My daughter’s first American Girl was one of the Girls of Today, which came after the first set of historical girls. The Girls of Today looked the same as the other dolls, but didn’t have any ethnic or historical baggage attached to them.  Her second one was Josephina (pronounced Hoe-sa-feen-a) the Mexican Girl of the Early 1900s. Her third one was Mindy the Sassy Spunky Jewish Girl of Modern Times.

My daughter loved them all equally, but I would have traded them all in for a single platinum haired Barbie in a mini skirt and go-go boots. As someone who grew up with small fashion dolls, I couldn’t wrap my head around American Girl Dolls and their chunky toddler bodies. They were supposed to be between 9 and 13 years old, right? They looked like Chatty Cathy, who was supposed to be about 9, but who looked 35 and headed for a Weight Watchers meeting.

And American Girl gear was so expensive! I’ve got in my storage unit right now a three-drawer storage bin on wheels that holds about $6,000 worth of American Girl doll school supplies, sports equipment, clothes and matching scrunchies. Because Josephina played soccer, we’ve got the ball, the goal, two uniforms, shin guards and a water bottle. Because Mindy is as clumsy as she is spunky, we’ve got a wheelchair (with working parts), a couple of casts and a sling.  The bin also includes a working computer (you heard me), a set of skis and all that goes with a day on the slopes, and a real McGuffey reader, complete with an index, footnotes and a table of contents.

One year for her birthday, all that my daughter wanted was stuff for her American Girl dolls.

“Whose birthday is it, anyway?” my husband asked, after the fourth little outfit was opened.  “Yours or Hose-a queena’s?

My daughter’s years with American Girl were probably its heyday. Shortly after she got out of them, I heard that the company was bought out by Mattel and the exploitation that had been tweaked and perfected for Barbie and her peeps was put into motion for Kirsten, Molly, Josephina, and the rest of the AG gang.

So now there is a homeless bullied American Girl doll. I don’t suppose she comes with any good stuff. Chances are slim she plays any organized sports. She probably can’t afford the fees. Or the clothes. The American Girl doll basketball ensemble is more than $50, not counting chipping in for the coach’s gift at the end of the season.

So what does she come with? Little fingerless gloves for picking through the trash bin? A hoodie to roll up into a pillow? American Girl is treading on thin ice here and without the $65 skating outfit.
For years American Girl Inc. has counted on spoiled little rich girls to buy their dolls and take them along to the tea parties and fashion shows that the company hosts all over the country. But who’s going to take poor Homeless Gwen? She doesn’t have anything decent to wear. And she hasn’t had a shower in weeks.

← Leave the Leaves ← ‘Tis the Season for Cinnamon Pinecones