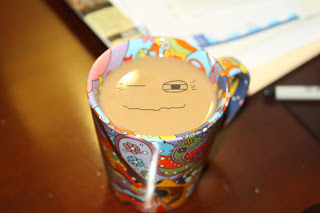 I have got to stop drinking more than one cup of coffee in the morning.

Ever since I quit my job and became a stay-at-home mom, the second cup of coffee has become my downfall.

My life has continually changed since then, but here’s a summary of the general sequence of events involving the second cup of coffee:

I’m leaving out going to the bathroom and stuff like that. You’re welcome.

Do some stuff like pack lunches, walk a dog, feed a baby, get the paper, convince a toddler to go back to bed, wake up a teenager 15 times, and other first-thing-in-the-morning tasks that change but reflect wherever I am in life

Pour my first cup of coffee

Drink my first cup of coffee while either reading the paper, checking email, checking Facebook or reading my hometown newspaper online

At this point I’m fully awake, thanks to the baby/toddler/teenager/dog and the first cup of coffee, but I’m still completely normal.

I am now a superhero who will organize a charity drive for the kid in the paper who might lose his leg. I will take a bullet for everyone on the editorial page, even the Republicans who I didn’t like just five minutes ago. And I will clean out all of my kitchen cupboards and put the spices in alphabetical order.

God help me if I’ve put on iTunes and a song comes on by Melissa Etheridge, Gloria Estefan, or any singer who has ever had cancer or an accident, or any song that I remember from high school. (Elton John best stay away from me and my second cup of coffee.)

The second cup of coffee has put me into a sentimental, inspired champion warrior against all that ails the world.

I’ve learned to stay away from the checkbook at this point in time, because I’ve been known to give away the farm, so to speak.

Before email came to earth, I would just make all kinds of plans about what I was going to do, make lists and charts and go crazy with a couple pieces of graph paper and a pen. Then, when the second cup of coffee wore off, I would look at my scribblings and say, “What the . . .?” and go back to my regular life, which was full enough without organizing protests and drives and charity balls, thank you very much.

I once read an ad in the classifieds of The Washington Post from a woman who said she was a former professional who was now a stay-at-home mom and was bored silly and wanted to meet with other intelligent women to talk about current events. I was all ready to call her up and start the current events talking, even came up with a few topics, but it was too early in the morning to call, so I let the idea peter out with the caffeine. I often wonder if she wrote that ad during a second cup of coffee.

But now that I have email and can get messages to the outside world at any time of the day or night, I’m so screwed. If I have volunteered to do something that no one else will do, something that involves making lawn-and-leaf bags full of tossed salad for a spaghetti dinner fundraiser, or anything using the phrase “clean up committee” or “phone tree,” check the time on that email. It was probably during my second cup of coffee.

I’ve thought about chugging the second cup of coffee and going directly to a third, but I’m afraid that instead of accelerating past me, the symptoms will double or triple and I’ll end up running for public office.

Don’t suggest that I stop after one cup. I’d never get anything done.

← Revenge of the Computer Nerds ← Fact: Florida Trees are Wussies