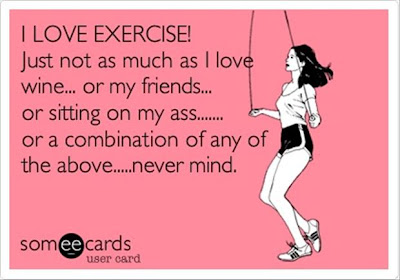 I thought I’d come up for breath to give you all a few updates on my Insanity workout regime, which I started a couple weeks ago. It’s definitely a harder workout than the Jane Fonda aerobics tapes I used to do. Jane and I hopped around my living room with our leg-warmers, leotards and headbands. There was a lot of arm flapping and big hair flopping. Shaun T, my current exercise partner, is hairless and ain’t nothin’ flopping on him. My upper arm flab does the jiggling for the both of us.

Shaun, who did Hip Hop Abs and some other jumping-around fitness videos years ago, seems to have simmered down with Insanity. We do basketball moves, football drills – you know, that one from Remember the Titans and, well, every other football movie, where you widen your stance and run in place really fast with your arms held out like you’re going to tackle some dude – and push-ups. Lots of push-ups and all kinds. Push-ups while pulling in your legs,jumping-jack push-ups, push-ups on your back, push-ups on your toes.

Except they’re not called push–ups anymore. They’re called planks. Someone figured out that people fear push-ups and might call it quits when they realized there were push-ups involved. Kind of like how they told me my colicky baby was just “having a fussy period.”  Pediatricians refused to use the word colic because it struck fear in the hearts and psyches of new moms, who were already on the brink of kicking some pediatrician ass for any number of valid reasons. They can call it whatever they want, it’s colic. It’s also push-ups. Calling it planks doesn’t make my arms better able to hold up my entire body weight.

My only complaint – other than it’s hard, there are too many push-ups, that Tania in the front row who can kiss my back fat with her never needing a rest or a drink of water (really, what is she? A camel?) and it’s harrrrd! – is that Shaun does the stretches in a slightly disorganized fashion. Hear me out: We do stretches and stuff on the left and then before we go the same thing on the right, he does a bunch of stuff in the middle. I know I get confused easily, but I’m always afraid I’m re-using the same leg when we move to the other side. It would be so me to have one leg all big and muscley and the other one tiny and wasting away in atrophy.

Push-ups and symmetrical confusion notwithstanding I’m holding my own with Insanity. At least I think so. I don’t work out in front of a mirror. Occasionally I catch a glimpse of my silhouette in the TV screen and – well, let’s just say I won’t be invited to be on Shaun T’s next video. Unlike some people I need an occasional water break.

Read Diane’s blog about moving at www.HomeSweetHomesBook.com. Her book, Home Sweet Homes: How Bundt Cakes, Bubble Wrap, and My Accent Helped Me Survive Nine Moves can be purchased on Amazon.com and BarnesAndNoble.com, and directly from the author, signed, by sending a note to info@homesweethomesbook.com.

← 4 Little Known Fun Facts About Getting Old ← If It Takes a Choir, Then By All Means Get a Choir