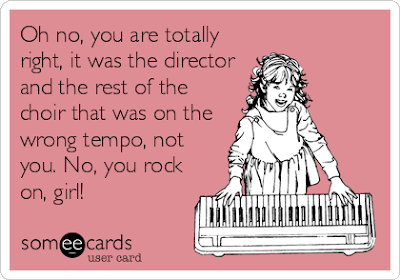 Have you seen the promos for this new reality show It Takes a Choir? I don’t get too excited about TV shows, but I’m pretty jazzed about this one. Gareth, a spunky British guy with Buddy Holly glasses, Lyle Lovett hair, and a colorful bow tie goes from town to American town recruiting all the misfits into a choir. Along the way he learns a few lessons of his own. Like even rednecks can hit a high C. Also how to play hockey in a bow tie.

I predict this show will be a smash hit. For at least five seasons and then just like all the other shows we steal from the Brits, we’ll ruin it by desperately trying to eke out another few million dollars and keep it running way past its shelf life. The best British shows are allowed to die with dignity after two or three years. We Americans, however, don’t know the meaning of the words quit while you’re ahead, so we keep pounding away, frantically adding has-beens, people who are famous for being famous, and Jane Lynch.  In 10 years, when It Takes a Choir has a balding, paunchy Gareth putting together an All Kardashian Choir, you can say you heard it here first.

I love the premise for this show, because I love choirs. When I was in high school, I was in the school A’Capella Choir and the church choir. I have a pretty deep voice, so I was an alto. The altos never got to sing the melody, which was OK with me. I loved singing the harmony. To this day, I sing the deep harmony part of most songs that I’m singing along to and all songs in church. I have so much practice, I make up my own harmony as I go. I’m not bragging but I’m pretty good at it. This is my opinion and not that of my family or anyone who sits in my pew.

Whenever I hear Let It Be by the Beatles I remember my high school choir director, Mr. Paterniti, making us hold our ribcages to check our diaphragm breathing, open our mouths real wide, and over enunciate (Lat eat beee, Lat eat beee, Lat eat beee, Lat eat beee. Speeeeking words off weez-dom, Lat eat beeee). Then I remember the day Mr. Pat lost it, because we kept screwing up the words, forgetting which verse we were on, and he marched us into the cafeteria and made us write the lyrics on paper. None of us had any pencils with us. It wasn’t the best day in the teaching career of Mr. Pat. He later became a police officer and firearms instructor.

When my daughter was a high school musician, my favorite part of going to the All State Music weeks were – no, not passive-aggressively shooting eye daggers at the parents who forgot to turn off their cell phones during performances, although that was fun – but sitting in on the choir rehearsals. They were high school kids, so there was a lot of silliness, but in between the horsing around and the tomfoolery,  the noogies and the dramatics, those kids would sing to the point of bringing me to goosebumps and tears. I have a feeling they did know all the words to Lat Eat Beee.

So this is why I’m so excited about It Takes a Choir. I wonder if Gareth will use threats to get his choirs to memorize the words, or make them hold their diaphragms, or – Mr. Pat’s ultimate weapon – make the suspected flat one sing alone in front of everyone.

I hope he holds off on the choir humiliation tactics, at least until they get to the Kardashians.

This is Diane’s funny blog. Read her other funny blog, about moving, at www.HomeSweetHomesBook.com. Her book, Home Sweet Homes: How Bundt Cakes, Bubble Wrap, and My Accent Helped Me Survive Nine Moves can be purchased on Amazon.com and BarnesAndNoble.com, and directly from the author, signed, by sending a note to info@homesweethomesbook.com.

← An Exercise in Insanity ← Is That Smell What I Think It Is? Nope, Not Even Close