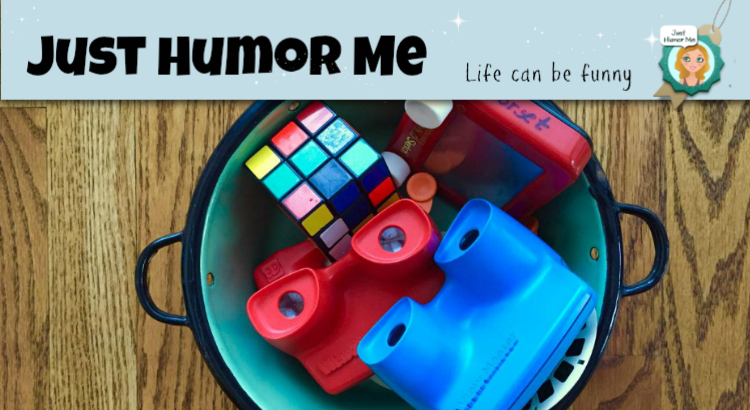 I’m starting to worry about my ability to be a grandmother. And no, not because I’m immature and I drink too much. That’s minor compared to this sad fact: We have no toys in our house.

I’ve got some time, since I haven’t been able to force, bribe or shame any of my kids into having babies. I don’t know what their problem is. I set a beautiful example of parenting at its finest. They may remember it differently.

It’s been suggested that it would be wrong of me to expect them to disrupt their young, ambitious, goal-oriented, hipster lives just so that I can get a baby in my life. I mean it’s not like I sacrificed a ton of shit for them, right? It’s not like I quit my freaking career to spend the best years of my life wiping their leakiest orifices, signing permission slips, and teaching them to catch a ball and swallow pills. It’s not like I spent my entire 30s and 40s wearing the same pair of chunky heels because the family clothing budget was all being spent on their light-up sneakers and Disney tees.

“Cary and Jack are still in their 20s, and Mike’s not that far ahead of them,” my husband said. “Cut them some slack.”

“Hey, by the time Loretta Lynn was 20 she was a great-grandmother,” I snapped. “Or was that Tammy Wynette?”

“It was someone in a dystopian horror film,” my husband said. “You don’t really want our kids to have kids now, do you?”

“Not right now,” I said, “but it’s never too early for us to get ready for grandparenthood.”

My husband took that to mean childproof apparatuses that will require 45 minutes and an associate’s degree in engineering to get to the Liquid Plumber. Yes, that, but also toys. More toys. Lots and lots of toys.

To be clear, we do have toys. We’ve got a slew of Ninja Turtles, enough Barbies to fill a life-sized dream house, Power Rangers, VR Troopers, Happy Meal toys, Legos, a Fisher Price barn and silo, a Brio train set, Polly Pockets, the often overlooked Teddy Ruxpin and the Land of Grundo . . . I could go on but you get the picture. All of these are now in bins labeled MEMORABILIA, which are on the bottom layer of stacked bins four high. And these stacks are in the creepy, haunted part of our basement. (It’s called the Tradesman’s Entrance but there isn’t a tradesman worth his apprenticeship who would go in there. It’s full of spiders and darkness.)  Getting my hands on those toys would require that I do the kind of physical work I’m not willing to do in a dungeon I’m not willing to enter. So for the purposes of this story, let’s just say we don’t have any toys in our house.

This fact showed up on my radar screen some months back when our friends Zach and Sarah came to our house for dinner and brought their 3-year-old son, Sean. I like these people a lot and I wanted to impress them, especially Sean. My reputation with 3-year-olds as a fun lady is important to me.

The morning of their visit, I realized our house was about as much fun to a kid as an insurance office conference room. We don’t even have interesting rugs. So to prepare for Sean’s arrival, I started to look for some toys.

“This is ridiculous,” I said to my husband. “When did we stop being any fun at all? Where’s that Rubik’s Cube you threw off the balcony in a rage two years ago?”

“The Rubik’s Cube is not a toy. It’s a mockery machine.”

After a thorough search of the house, I came up with three categories of quote unquote toys we have: Russian dolls, bobble-heads and paper dolls.  One of the Russian doll sets is Flo’s Family from Progressive. The bobble-heads are of Dr. Evil, Pope John Paul II, and Alan Iverson. And the paper dolls are Michelle Obama, Hillary Clinton, Gilda Radner and Lady Gaga. Some of these toys might or might not be rated PG-13.

Fortunately, Sean’s parents brought enough toys with them to open a day-care center. They came in with trucks, trains, a basketball hoop, plastic food, tea party service for 12, a platoon of toy soldiers, a soccer ball, and a bottle of wine. (I opened the bottle of wine and handed it right back to them with two straws.)

It wasn’t until after they left that I remembered the toys that I had pulled together.

“I should have shown him the Flo’s Family from Progressive Russian dolls,” I said. “I love those characters. Todd and the baby . . . Jenna . . . And my favorite – the grandmother, Diane.”

Diane Laney Fitzpatrick has been writing Just Humor Me since 2007. Her three children are grown and yet she has no grandchildren. She lives and writes in a fine but toyless home in San Francisco.  If you’d like to get an occasional email reminder of Diane’s writing, subscribe to her newsletter here.

← Grocery Store Monopoly: Do Not Pass Go, Do Not Collect Jack Squat ← I Want to Do All the Things