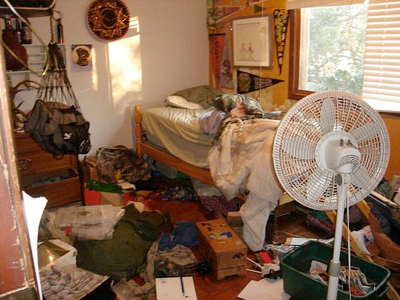 I was doing pretty well being New Diane, especially selling our house this time around. But today Old Diane came back for a surprise visit. She didn’t bring any luggage, so she didn’t stay long, but for a little while today, there she was, in my car eating pudding with her hands, smelling like broiled fish and talking to the dog.

We had a showing today. Our house has been on the market for nearly three months now, just long enough to hit a nice groove, become comfortable with the fact that strangers are going to come into my house when I’m not here, and not freak out anymore.

That’s good in some ways, because you can’t possibly live with yourself when you’re in the early stages of house selling. The stage where everything has to be perfect all the time and you eat dinner over the garbage can at the curb, just in case you get a call for a last-minute showing.

That can’t last. Old Diane would have let things go to pot, and taken a Lil Laney philosophy of I’ll Worry About it Later. When Later came rolling around, that is, when the realtor calls and says they want to show the house, Old Diane would look around at the pigsty that her house had become and start throwing things into large leaf and lawn bags, tossing them in the car and hiding in there during the showing.

New Diane is selling this house, so things have so far been a little bit different. Every morning I’ve been getting the house half ready to show. I make the beds, clear off my bathroom counter, and take everything out of the shower with me (I’ve had good practice with this type of life, since I lived in the dorm in college).  I wash the dishes right after dinner, put clean clothes away shortly after they’re folded, and I even put the TV remote on the shelf next to the TV, a spot that is as attractive as it is impractical.

So that was going along pretty well until today. I knew as of 10 p.m. last night that I had a showing at noon today. I figured I’d spend the morning getting the house ready, but, you know, it was Easter just the other day and I had leftovers that weren’t fitting well in the frig, a thin layer of Easter grass covering the downstairs, candy that wouldn’t fit anywhere and too many leaves in the dining room table. So it took me a little longer than I expected to clean up.

Time began to run out on me. I found myself running through the house with a vacuum hose in one hand, a lawn and leaf bag in the other, and a bottle Windex hooked to my waistband, paper towels scrunched into my pocket. Fifteen minutes to go and I opened the oven to discover a broiler pan from the salmon I made for Easter dinner, which I had forgotten about. The smell of fish poured out of the oven into the house. I grabbed the pan and threw it in the car, along with the garbage bag full of Easter candy, some eggs, yesterday’s mail and some dishes that had to be returned to other people. Back in the house, I did a quick trot with the can of Lysol, much like I was carrying the Olympic torch, to inaugurate the fish cooking games. Back to the car with the Grace the dog, her dish, my purse, an extra phone I couldn’t find a dock for, some throw rugs and the tea kettle. That’s when I saw the half pan of butterscotch pudding dessert. Into the front seat it goes, one level above the fish-encrusted broiler pan.

That’s how Grace and I spent the next two hours (the house lookers were late getting there). I took her on a walk and then ran some errands, being careful not to be gone too long. It was only going to be a matter of time before Grace discovered that the fish and whipped cream smell was coming from the front seat. We had to spend the last half hour around the corner from our house, with me peering between two trees to see the house lookers’ car, so I would know when to go back home. The pudding was looking sooo good . . . I didn’t have a fork . . .

What would Old Diane have done . . .  Who am I kidding? Old Diane wouldn’t have any pudding left two days later.

← The Hosts With the Most ← On the Road Again