You are here: Home / Archives for 24 hour news

I am hopelessly addicted to 24-hour news. I know, I know, I’ve written about this before in a previous blog, but it’s an addiction, what do you expect? It’s all I want to talk about.

A year ago I didn’t even know who Keith Olbermann was. Now I want to sit down with him at my kitchen table, make him some tea, defrost some cheesecake for him, and talk to him all afternoon. Rachel Maddow, again, didn’t know her and now I’d consider switching teams if that’s what it would take to get her to come over to my house.

Wolf Blitzer, Lou Dobbs, Anderson Cooper, Campbell Brown, David Gregory, Norah O’Donnell, Chuck Todd – these guys were just a motley crew of talking heads before the presidential election coverage began. Today I want to bake them all cookies. I have actual opinions about their clothes, their weight (Chuck could lose a few pounds around the middle), their beards, their hairlines and their dental work.

And Chris Matthews? If 24-hour news has replaced Law & Order in my life – and it has, believe me, it has – then Chris Matthews is my new Jack McCoy. He’s got that I’m-quirky-and-cranky-but-I’ve-earned-it thing down. I love how he beats a dead horse right into the ground when he gets on something that he thinks is clever. I love how he spits when he talks. But most of all I love him because I’m convinced he’s one of my cousins who was switched at birth. He reminds me so much of my Pittsburgh Lueke cousins, partly because of his Philadelphia accent, which is just like their Pittsburgh accents, partly because he looks a little bit like my cousins, and partly because he’s just a nice guy who I could picture at my family reunion, playing corn hole, eating potato salad and looking at photo albums with Aunt Betty.

Before this presidential election, I hated TV news. No offense to my fellow journalism grads whose degrees were in broadcast. (Yes, we print journalists openly showed our disdain for you and for that I apologize. You’re the only ones who still have jobs.)

Now, however . . . well, here’s the thing: I get up at 5:30 in the morning, stumble out to the kitchen and while I’m making coffee and packing lunches, I turn on MSNBC and find out what happened while I was sleeping. If nothing is new and they’re just replaying what I watched the night before, that’s fine with me. I’ll rewatch the good stuff over and over again. Who am I kidding? I’ll watch the boring stuff over and over again. If it’s about this presidential race, I’m riveted.

Throughout the day, I’ve got as many as three televisions on throughout the house, so that as I wander around doing housework and putting things away, I can always hear the blather of the pundits. (I’d like it known right now that I’m the same person who didn’t even own a TV from 1981 until 1983, and on and off throughout my parenting years I’ve had no cable households.) Sometimes I have to make a phone call or actually leave the house for some reason and I feel compelled to turn off the TVs. I’ll get up and go stand right in front of the screen, my hand hovering over by the on/off button or my thumb just above the remote button. Sometimes I stay that way until the next commercial. Sometimes it’s longer. Oh snap, I can’t believe I’m revealing this about myself.

I was feeling pretty bad about it until last week when I was talking to my friend John in Cincinnati and he admitted that sometimes he wakes up in the wee small hours of the morning – that time between the middle of the night and dawn, the time when college kids are starting to think about going to bed – and he lays there and says to himself, “I can either try to go back to sleep, or I can get up and put on MSNBC and see what happened since I last watched at midnight.”

That’s what I’m talking about! See? I’m not the only one.

So if you come over and notice that the rooms without TVs have cobwebs, the bedding hasn’t been changed and the room hasn’t had a mom in it since the beginning of the primaries, you’ll know why. I’m planning to make it all better on Nov. 5. That’s the day I go cold turkey and start the rest of my life.

But haven’t I gotten to know these people? Won’t I want to continue to watch them and hear about wildfires in California, kids who’ve fallen down wells, congressmen who have had affairs? I’m thinking probably not. It’ll be back to Jack McCoy and Law & Order for me. 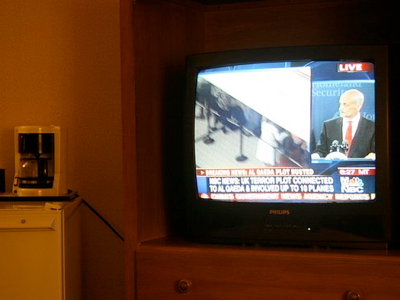 I was a news junkie for two days. On Tuesday and Wednesday, I did little else but watch MSNBC, CNN and call up news online and watch YouTube videos.

I’ve known news junkies. I once knew a guy in Cleveland who told me when he was at the office or at home, he had a TV going with a news channel on it at all times. In every room, including his bathroom, for every waking moment. I thought, “Wow, that’s really . . . booooooooring.”

The presidential primary election on Tuesday is what drew me in. I started to not only understand the stats (“Of the 37% of white voters in North Carolina who voted for Obama, 83% are working class rural former supporters of Bill Clinton, of which 58% said they would not vote against John McCain if Hillary Clinton were the Democratic nominee.”) but I also began to actually care. I started to wait for Chris Matthews to tell me how a demographic of what boils down to 14 people I don’t know who live in Indiana will vote in November, if they can get a ride to the polls.

In the midst of that, I got a phone call and an email from two friends alerting me to the Ohio Attorney General Marc Dann scandal. I know some of the people involved, so it was personally painful and at the same time fascinating to watch just how quickly a handful of Youngstown politicians can muck up state government, with just an expense account, beer and a Hawaiian pizza to work with.

That led to a mini-obsession over the Detroit Mayor Kwame Kilpatrick sex scandal, and new updates on the former New Jersey Governor Jim McGreevey sex scandal. Among the three, you’ve got sex toys, unbuttoned pants, three ways, and farts in a Tupperware container. I could go on, but do you really want me to?

It’s a miracle I can get a load of laundry done around here.

Some fun facts that have come out of my 48-hour news junkie stint:

Did You Know that your text messages can be forensically tweezed out of your cell phone if you happened to be in the middle of an Ohio Attorney General Sex Scandal?  If I ever get into trouble, just know that when I texted my husband thatggt hmw skillmmNc I meant “Call me after your meeting.” My inability to figure out textspeak may save me someday.

Did You Know that no matter how many times you say, “It’s not illegal to have consensual sex,” your constituents will still not want you to drive a state owned vehicle or live in the condo that they’re paying for?

Did You Know that there is a YouTube video of just about everything every person does all the time? And that by watching enough YouTube videos you can conclude that most people have bad teeth, limp hair and a tacky afghan across the back of the couch.

The Internet is great and all, but the problem is the links. You’ll be just about saturated with one news story, having read the same quotes three or four times and getting a stiff neck and cold-as-death mouse hand, and then you’ll glance over to the right side of the page and see a link for “Sex Dungeon Dad Says He’s ‘Not a Monster’” and there goes another hour and a half. Just when you’ve read all about Sven and his bad behavior, you’ll see an ad for “Teeth Whiteners Exposed.”