You are here: Home / Archives for bike 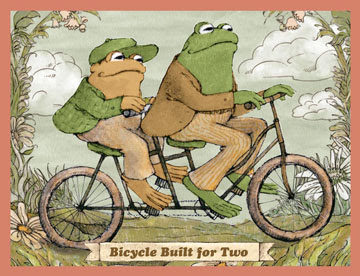 My husband and I did something sweet and dorky and corny and precious and I’m hoping so uncool that later it seems uber-cool in retrospect. We bought a bicycle-built-for-two.

I may or may not have written a blog about my bike riding skills or lack thereof. OK, just checked and no I have not. So barring any rude interruptions from my childhood friends, let’s go forth under the assumption that I I am and always have been a decent bike rider.

A couple of Mothers Days ago, my husband bought me a bike. I embellished it with a white basket and a bell, put on my new $40 matching helmet and rode around the neighborhood, came home and said, “I’M NEVER DOING THAT AGAIN.” I can’t explain why, but when I ride a bike I put a death grip on the handlebars that no rubber coating can withstand. I seem to put all my body weight into my fists and I squeeze those handlebars with my biceps bulging, my ass cheeks clenched and my whole upper body – who am I kidding – my whole body – in a giant muscle spasm. It’s exhausting. I possibly am not balancing correctly, since I didn’t learn how to ride a bike until a very late age (I won’t tell you how old I was. We’ll save that for when you have to tell me something embarrassing about you in return).

So a couple weeks ago, when strolling through Walmart on a Saturday, we came across a tandem bike on display.

“We should get one of these,” my husband said.

I really didn’t think he was serious. I thought he was saying that in the same spirit that he says it when he sees camping equipment, semi-automatic weapons, his-and-her Hawaiian shirts, and any and all cooking gadgets. He talks a good game, but he doesn’t mean it.

This time, with the tandem bike, he kept bringing it up. We would be driving to the beach and he’d say, “You know, if we had a bicycle-built-for-two, we could bike to the beach.” I’ll admit, I allowed myself to picture us, pedaling across the Donald Ross bridge, down to the seashore, where the ocean breeze sexily blows my hair across my face not in a way where I can’t see and I scream, but in a sultry, carefree way. In this vision, we are one kelly green and navy monogrammed sweater draped across my shoulders away from being in a J Crew ad.

So, shit yes, we bought the bike.

We immediately set upon pimping up the thing. I offered up the basket from my bike, which has been gathering dust and lizard poop in the garage. My husband thought my white basket was “not masculine enough” and opted instead for a black basket. If there is such a thing as a masculine bike basket, we have it on our studly bicycle-built-for-two. He also turned down the red bike horn, saying he would yell, “Yo!” in a deep voice if we wanted to let someone know we were approaching.

1. It’s easy to bike when you’re in the back. I don’t squeeze the handlebars like when I’m riding solo. Much like being in the front in a canoe, the other person is doing all the work. But unlike a canoe, I’m in the back and the guy in front doesn’t know that I’m not doing any work. Make a few grunting noises every few blocks and what does he know? Last weekend I plucked my eyebrows while “we” pedaled uphill.

2. It should be called a smile bike, because everyone who sees you on that thing smiles. Sometimes they’re smiling sweetly in a life-in-the-late-1800s-was-oh-so-grand kind of way. And sometimes they’re stifling a cynical, mean laugh, that is definitely laughing at you, not laughing with you. Either one is fine with me. When yuppy clothing catalogs make tandem bikes cool again, you’ll all remember that I was the trend-setter.