You are here: Home / Archives for hairdressers 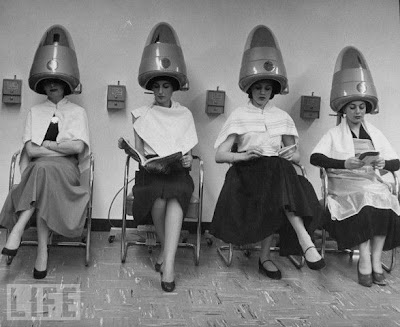 For a self-proclaimed moving expert I’m kind of a dumbass. Once again, I forgot the worst thing about moving: finding a new hair person. Like childbirth, about a year after a move, you forget how painful it is to have to find someone new to cut your hair. Your forehead has recovered from all the bad try-out haircuts you had to get before you finally found someone decent, and you put the past behind you and resume making fun of new people in town who are getting bad dye jobs and botched Brazilian keratins.

I’ve lived here 3 1/2 months and I’m about to move on from Contestant Number 1 and try Door Number 2.

At least this time I didn’t walk around with a Dorothy Hamill or a DC power helmet for two months during the hair stylist audition period. Rachel has been giving me great haircuts and color, as well as head massages that are as orgasmic as they are minty. But she’s too expensive and she is convinced that I should have long blond hair.

“I don’t want long blond hair,” I told her, when I was trying to describe what I wanted her to make me look like. I had to cut to the chase because saying “age appropriate but just nice” and “reddish-blondish-reddish red” was getting lost in translation from regular person language to salonspeak.

“Okay, so . . . what you’re saying is more Jennifer Anniston than Jessica Simpson,” she said.

“Okay, so . . . both of those women have long blond hair,” I said quietly. “I don’t want long blond hair.”  I repeated this sentence several more times, but mostly to my husband after I got home. I liked Rachel and I wanted to be agreeable. I wanted her to like me. She is really good at what she does and she made me look fabulous, but – and I know how crazy this sounds – I didn’t really want to look that kind of fabulous.

So it’s back to the drawing board in auditioning hair stylists for me. Between all of my long distance moves and all the auditions, I’ve rejected people because they acted all high and mighty, because they drank too much Diet Pepsi early in the morning (and that’s just wrong), because they themselves had bad haircuts, and because they spent the whole time complaining about their lower back pain and foster children. And some because they didn’t cut hair very well. When I still lived in Hubbard, my sister and I both went to a girl whose conversation ice breaker was “So, are you seeing anybody?” It was her version of “Nice weather we’re having” or “How ‘bout them Browns?” She did do a nice precision bowl cut, though, and it was the late ‘70s. So we kept her until we moved.

Around 2000, 2001 I decided to install a gender filter and only go to men. I was convinced that with a man, I was more likely to score somebody who saw hair styling as a career, an art, a serious job to go to every day, than somebody who chose cosmetology over horticulture at the Vo Tech because the classes lined up better with her boyfriend’s shop schedule. I know that’s sexist and presumptuous. I’m just going with what my experiences were at the time.

The men I’ve had ranged from Michael, a tiny Greek with wavy hair down to his elbows whose wife had a white crewcut, to ballet dancer Stephen who talked politics with me, to  Calvin Klein model Keith who told me how to condition a leather couch, to Kenny, who I will talk about now.

Kenny was my hair stylist in Canton, Ohio, who while he cut my hair regaled me with his weekend partying escapades, which I soaked up like a dried-up sponge because I had an infant, a toddler and a 7-year-old at home and my weekend partying consisted of breaking out the good Play-Doh and peeling someone’s sunburn. Kenny was out and proud and he thought it was the most hilarious thing ever that the fear of AIDS had just reached the world of hair cutting and new safety rules and regs had been issued, but they only applied to barbers, not hair stylists. You know, because of all the barbers that might be HIV positive. Kenny would laugh and laugh. And I would say, “Hey, watch those scissors, man.”

Kenny’s go-to conversation starter was always, “So where are you going tonight?” He assumed that his customers arranged their hair appointments around some social event. I was never going anywhere the night of my hair cut appointment. I already had to pay a babysitter for the dang haircut, I wasn’t going to pay her again just so that people could see my new haircut.

Once, though, I offhandedly mentioned that I was going to the National Football Hall of Fame dinner, where I would be sitting only a few yards’ pass from Walter Payton, and Kenny gave me a teased, rock-hard updo that made me look like somebody’s stylish ‘60s Great-Aunt Myrtle. I wrote about this in a previous blog about five years ago, so I won’t go into any more detail for fear of contradicting myself.

Kenny was the one who had probably the best moving tip that I have ever heard: To find a new hairdresser after you move to a new city, go to the mall, sit on one of those benches near an anchor store or the food court and look at people’s hair. When you see someone who has a great haircut, put down your Orange Julius and ask her where she gets her hair cut.

“People will be flattered,” Kenny said. “People want to tell you where they get their hair cut.”

I tried that about four moves ago, and it didn’t work. I got distracted by cute babies and clearance sale window displays and left with two-for-one sandals and nobody’s salon recommendation. And I learned that people are not all that flattered when you ask if you can pick up their babies.

When I was young and I fantasized about being the First Lady, I took my own hairdresser to the nation’s capital with me. No slinking around the mall (or the Mall), no surprise Toni Tennille-do’s for me; no sir. It was Bring Your Own Hair Guy all the way. Moving to the White House has its own set of worst things; finding a hair person shouldn’t be one of them. But would it be Kenny? Would it be little tiny Michael? Or would I have to show girl power solidarity and take one of the skinny, Diet Pepsi drinking waifs? I’ll be holding auditions Thursday at noon. 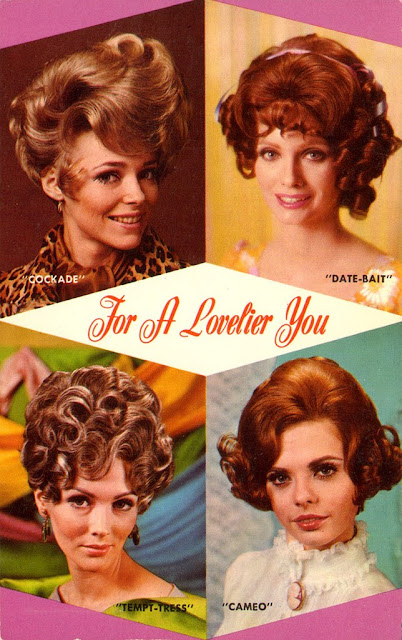 You know it’s time for a new hairdo when you start to think that one of the hairstyles above might be an OK thing to try. (I’m thinking “Date-Bait” might be just the funky, youthful, asymmetrical look I’ve been needing.)
My hair is looking nasty lately. This happens to me about every 12 years. I get a perfectly fine haircut, the same haircut that I’d been getting for a while. It looks great right up until I pay and leave the salon, and then I look in my rear-view mirror and see the person on America’s Got Talent who everyone is so surprised has a beautiful voice.
To add to my inner Susan Boyle, I’ve been having to wear my glasses because I’m within the last two weeks before my Lasik surgery. My glasses aren’t the cool, smart-girl, sassy, confident black glasses that you see on actresses who went to Harvard and those Pearl Vision ad models. I bought these glasses in 2001 at JCPenney Optical, the cheapest ones I could get, since I didn’t think I’d be wearing them much. Being a contact lens wearer, I only needed glasses to walk from the bathroom to bed, and back again. (Even the guy who sold me the glasses, who incidentally makes less than the clerks at the Gap, when I said I’ll take these, said, “. . . Really? Oh, OK . . . Wait, these?”)
About a year ago one of the nose pieces fell off, so these last 10 days of constant wear have left me with a small gouge in my left nose-bridge. Despite the metal-on-skin grip, the glasses keep slipping down my nose. Crookedly. In photos one lens gets all glarey and my daughter said, while looking at some pictures from Thanksgiving, “Look! Mom looks like she’s wearing an eye patch!”
My glasses + my current hair = my kids telling their friends that I’m their mom’s ugly twin, the aunt that has come to visit for a long, long time.
I’ve decided to use this perfect storm of frump to start a new life with a new hair person. I’m grateful that I resisted the urge to Facebook-friend my current hair person, because then I’d be stuck going to her forever.
I don’t break up with hair people very well. (I know they’re called hair stylists, but if you knew anything about me, you’d know why I can’t ever have someone in my life who is called a stylist. That would just be ridiculous.) I’ve been known to move out of state before voluntarily switching hair people. I’m just really afraid I’ll run into them somewhere and have to explain why I left. I’m not good at confrontation.
“Do you want a color consult?” the new hair guy’s receptionist asked when I called to make an appointment.
“Sure, why not,” I said. “I’d also like a cut consult, a bangs seminar, and a how-to-care-more-about-what-the-back-of-my-head-looks-like pep talk. Plus anything else he’s good at.”
That’s right. I’m going with a guy this time. I’m unabashedly sexist when it comes to hair people and I am convinced that men cut hair better than women. I know there are probably some very wonderful female hair people who wield a mean blowdryer, but my personal experience has been that most men go into hair careers because they consider themselves serious, artistic designers of hair. Most women go into hair careers because cooking was filled at the vo-tech.
His name is Dino ($), he has an Italian accent ($$), the salon is named after him ($), and there’s valet parking ($$$). I’m afraid I’m into serious money here. I might have to start calling him my hair stylist.