You are here: Home / Archives for my cousin Mike Laney

I just discovered my new favorite blog, “Our Life in the Kitchen,” which is written by Karen Bove, who is a photographer, a cook and a midwife.  She is master of two of my favorite things about being a human: Food and babies. And she takes pictures of them both! Which makes her life three cherries on a slot machine.

Her blog is now the owner’s manual to my new life, the one I’m going to start on the first day of school in August, the one where I cook gourmet meals every night while NOT watching Bones reruns on the little TV on the kitchen counter. In fact, in my new life, I’m selling that little TV and using the money to buy a large meat cleaver and a small mortar-and-pestle, two things that I saw Karen use on her blog and which I think will bring me closer to being her. (And the mortar-and-pestle has the coolest sounding name of anything you’ll find in a kitchen short of the spork.)

In my new life, I will make things like couscous and sorbet and polenta and stuff with arugula in it. (My husband bought me an arugula plant, so I’m halfway there, man.)

OurLifeintheKitchen.com shows Karen making a healthy, colorful dish with photos and captions, starting with a photo of the ingredients all arranged on her kitchen counter.

I love photos of ingredients arranged on a kitchen counter.

Every since Marge Mariner, I’ve been fascinated by watching someone else cook and explain what they’re doing while they do it.

Marge Mariner had a cooking show on local Youngstown TV when I was growing up. Her show was probably modeled after Julia Child, but in retrospect, she was more of a Martha Stewart with glasses and a short older-lady bouffant.

On Kitchen Corner With Marjorie Mariner (which we knew simply as the Marge Mariner show), Marge would stand there behind the counter with all of her ingredients already measured out. This alone fascinated me. Not only did she have everything pre-measured out, she had it in these tiny sparkling, clear glass bowls and clear glass measuring cups. Even 1/4 teaspoon allspice or 1/2 teaspoon salt were measured into tiny little glass bowls, like Barbie-sized bowls.

So it would take Marge less than 10 minutes to throw the whole kit and kaboodle into a large mixing bowl (again, clean clear glass, no raw hamburger residue or dried-on cookie batter from the last thing she made), mix that up, pop it in the oven, and be done with it. She hardly broke a sweat.

My cousin Mike was on the Marge Mariner show once. He was in high school, so it may have been some special guest thing, but he was on our TV and to me, that put him right up there with David Jansen and Ben Casey. I didn’t give a rat’s ass about the difference between local TV and a national network. He was on our TV. The Marge Mariner appearance instantly got him top ranking in my esteem, which he later lived up to, when a hot air balloon landed in our neighborhood in New Jersey in 2002 and Mike stepped out of it and said, “Aren’t you my cousin?”

My friend Mary Beth found this photo of Marge: 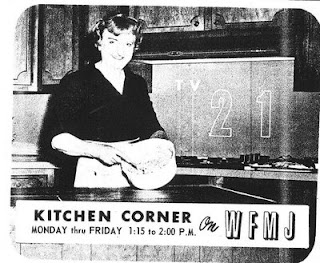 Mary Beth and another friend, Sandy, said they remember their moms making some of Marge’s recipes from the show. Anybody else remember her?