You are here: Home / Archives for NIMBY 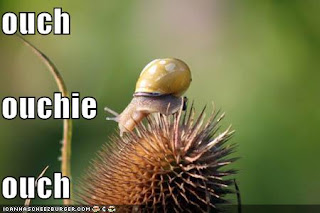 The politics of my yard are getting more intense. I hadn’t been out there to do a lick of yard work in a long time, so yesterday I tried to do a little meet-and-greet and solve some problems – you know, let them know I am concerned about their well being and am committed to their happiness and success.

The Swoopy Purple Things were not happy about my husband’s recent forced eviction of their neighbors, the Rock-Hard Yellow Monster Bush, and they were pretty much staging a lie-in. I had to cut their tops off to get them to sit up straight.

Meanwhile, the Rock-Hard Yellow Monster Bush’s replacements were hanging in there. They’re a motley crew of ferns, Red Leafy Plants and nondescript bushes that are happy to be here, but still feeling the sting of the older, more established plants. No one likes to be the new kid.

Getting all the plants, trees, bugs and other living things to coexist harmoniously is hard work, let me tell you. Someone’s always causing trouble or threatening to commit suicide unless we provide more water and food, hire their friends, and clean up the crime in their neighborhood.

The biggest thorn in my side (is not roses, but, ha! Good one!) is the Delicate Ball Fringe Weed, which is gaining ground in the front beds. The Delicate Ball Fringe Weed is pretty and feminine; it looks like strands of ball fringe in which the balls were smashed flat and painted Sweet Pea green. Sure, they look cute, but make no mistake: The Delicate Ball Fringe Weed is the Agent Smith of the front yard. It works undercover and blends in with the bushes that you don’t ever look too closely at. Then quickly and quietly it infiltrates the whole damn bush. By the time you even notice it, it’s taken over. You can try pulling it out, but it will break off (thus the “Delicate” in its name). And then it will laugh at you and multiply before your very eyes. A lot of my time and efforts are being spent trying to save the front bushes from this cancerous blight.

The ivy surprised us all by running for re-election in the back beds and winning! I thought for sure they would be defeated by the Red Leafy Plants, which ran a tough campaign and got my husband’s endorsement. (“We’re Prettier and We Don’t Want to Take Over the World” was their slogan.) I was campaigning for the ivy, but was getting exasperated because it kept overstepping its bounds and climbing up the Red Leafy Plants and threatening to choke them and everything else to death. It’s embarrassing when you back a candidate that does something stupid and makes you regret it. But with some help from me and my clippers, the ivy kept a low enough profile to get another term. Now don’t screw it up, guys.

Wisconsinites could take a lesson from the agreement that I’ve been able to hammer out with the snakes. They are allowed to slither and squirm to their hearts’ delight behind the row of bushes under the study windows. They could hold Satanic rituals back there for all I care. I am not going back there. Ever again. But they need to stay out of the rest of the yard while I’m around. For the most part, they comply, but every so often I find a shed snakeskin lying on top of the bushes on the other side of the house. It’s their way of saying, “Yeah, I was here. While you sleep, you don’t know where I’m going to be. Watch yourself.”

We’re all about diversity here at my house, so we’ve introduced plants of all types and colors, native and non-native, ferns to represent the vasculars and spore producers, Those Plants That Start With an H That I Always Want to Call Hacienda or Hyacinth, and even some cacti. Even though we’ve tried to go all We-Are-the-World and get everyone to intermingle, the succulents tend to only want to grow in their own neighborhood. The avocado trees are both so pissed that we separated them and made them live with others that are not their kind, that they both refuse to produce any fruit. “Why can’t you all just get along?” I yelled at them just yesterday. They didn’t answer. They’re very good at giving me the cold shoulder.

Sometimes constituents can be such a pain in the ass. Even though I can’t remember any of their names, I do sincerely care about them. Sometimes they need so much stroking. There are times that I am this close to threatening to bring in some bamboo just to keep everyone in line.