You are here: Home / Archives for smokers 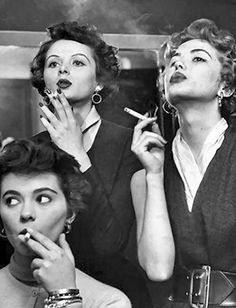 I was in middle school to be exact. And I got this idea in my head that I would look as sophisticated as Holly Golightly if I had a cigarette in my mouth. I used the hour between the time I got home from school and my mom got home from work. If ever there was a case for stay-at-home parenting, it’s that blasted hour.

I found her cigs, which were basically sprinkled all over the house. A pack of cigarettes with at least one or two was never more than a few steps away from wherever my mom might be at any given time.

I found matches, lit one, and stood in front of the floor-length mirror on the inside of the coat closet in the living room and admired the sight of me, an eighth grader, looking not at all like Audrey Hepburn. And yet I persevered. I held it provocatively and acted out a pretend conversation, which was humorous (I laughed, my mirror image laughed back) and flirtatious (I made eyes at myself as I took another drag – cough cough.) My goodness, I would have impressed some boy with my cosmopolitan badassery if the whole thing had been real.

Those cigarettes were the worst things in the world. They tasted like the inside of a toilet at a biker bar that had been clogged for years. I thought that maybe in some weird flukey way, I had just happened to get the cigarette that was made with the tobacco that had been scraped off the bottom of someone’s shoe. They can’t all taste like this, can they? After I got done smoking the first cigarette, I drowned the butt in water and tore it up into little pieces in the garbage. Then I brushed my teeth, gargled with Listerine (the brown, arsenic-flavored kind), and ate a bunch of Wise potato chips. To no avail. I had the taste of tobacco-flavored floor debris in my mouth for three days. Forty years later, on a humid day I swear I can still taste it.

That didn’t stop me from repeating the whole ridiculous charade again a few more times. I came to my senses just short of starring in my own after-school special.

I credit my mom’s choice of smoking non-filter Chesterfields for my lifelong non-smoking status. Later, she would switch to Chesterfield Kings, which I believe had a filter. And then Virginia Slims, where she earned points and got free datebooks with feminist quotes and pictures of Victorian era women on every page. If she had been smoking either of those when I dipped my toe into the smoker’s world – if there had been a single pleasant thing about the whole experience – I might be a smoker today. At the very least I would have finished the conversation with myself in the mirror.

Read more of Diane’s Just Humor Me columns anytime. We’re open 24 hours a day. Sign up for our weekly e-newsletter and get new blog posts and other neat stuff. And if you like her blog, you’ll love her book, Home Sweet Homes: How Bundt Cakes, Bubble Wrap, and My Accent Helped Me Survive Nine Moves.