You are here: Home / Archives for soccer game 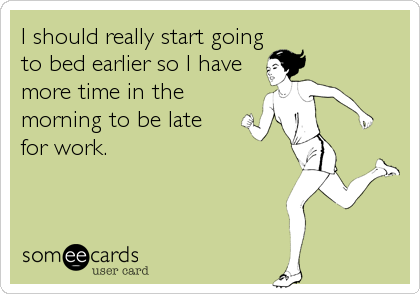 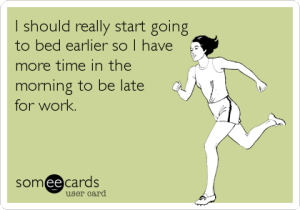 When I was growing up, we were always late. We were late to church almost every Sunday, including on my Confirmation, when I ran in through the double doors just as my fellow confirmands were proceeding up the center aisle. Pastor Kridler grabbed me by the arm, threw a cross necklace around my neck and gave me a push. I brought up the rear as my family ran in to find seats. My memory of most family weddings is arriving at the church just as the bride and groom were coming out.

I’m not faulting my mom. She was a single parent with five kids, in a house with one bathroom. I’m not surprised we were chronically late, but I am surprised we ever got anywhere at all.

People who are always late fall into three general categories: The frazzled, busy people who try to be on time, but time is passing just a little too fast for them; the self-centered people who want time to speed up and slow down to stay in synch with their personal desires; and the people who simply don’t have a concept of time or the speed at which it passes.

My friend Gail belonged in that last group. I love her like a sister but if she was on time, it was because of a lie or a fluke. When I lived next door to her she was my interior designer, and I use that term in the loosest sense. I was her worst client. She was designing rooms for pro hockey players’ wives, making furniture in her garage for theme bedrooms, and she only agreed to help me because we were friends. Her biggest accomplishment in my job was convincing me to put something besides the salt and pepper shakers and a stack of napkins in the middle of my kitchen table.

Gail wanted to take me to a craft fair to look for a giant wreath.

This was in the late 1990s, an era when if you had a family room with a vaulted ceiling, you celebrated it by buying a giant wreath and risking life and limb to hang it where it could be seen from space.

Gail had a giant-wreath-maker in mind who was going to be at a craft fair, so she called me and said, “We have to go to the craft fair on Saturday.”

I had my daughter’s soccer playoff game that I had to be at, because I loved attending my kids’ games but mostly because I was her ride and it was my turn for snack.

Gail pooh-poohed me and my soccer mom schedule and insisted that of course we could do all that and get home in plenty of time. She held her tongue, but I could sense her disappointment in me for not making my two-story family room decor a bigger priority in my life.

So we went, we found the giant wreath lady, picked our flowers, put in our order, and walked around the craft fair while the wreath was being made. The whole time I was looking at my watch, calculating how close we were getting to the absolute latest we could leave and still get me to that soccer game.

Of course, when we did get to the wreath lady, she was still working on my wreath and I started to watch as my cushion time dwindled away. I was just about to say, Screw it, I’ll pick it up from her house later, when the wreath lady said she was done. She presented me with the giant wreath, which was really very nice, but I certainly didn’t need a long explanation of how she put it together. It took her an agonizingly long time to write up the sale and give me change. Then she insisted on wrapping the wreath in giant big brown paper. I was now officially late. I thought I was going to explode if I didn’t get to Gail’s SUV Right. Freaking. Now.

Carrying the giant wreath, I was practically sprinting to the parking lot, when we turned a corner and Gail stopped. “Oooh! I didn’t know they opened that section! There are more tables over there. Do we have time to go over there real quick?”

Gail’s shopping obsession had her living in a world where time takes a little break, stops and hovers, pulsating over craft fairs. Speechless, I spluttered something and took off running toward the parking lot, veins breaking in my forehead as I ran. She got her answer.

If I recall, I got to the soccer game if not on time, then close enough. In the grand scheme of things, it wasn’t worth the anxiety I went through. Showing up on time to a soccer game in itself is hardly an accomplishment. Landing that giant wreath, though – that was quite a coup.