You are here: Home / Archives for Staples 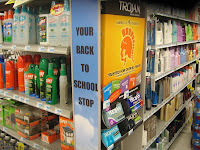 My husband and I were wandering around Home Depot talking the other day (When you’re married 25 years and living the dream, this can happen more often than you would think) and we were discussing school starting in about two weeks, and he said, “You’re going to have to get school supplies” and I did not pop a vein.

With only one child in school and that school being high school, I no longer have to call a bomb threat into Office Depot in order to get all the supplies that my kids need by the first day of school. I’m not sure why, but this year getting school supplies is one of the mellower things on my list of things to do by August 18th.

It wasn’t always like this. When I had three kids in different schools, the school supply lists were my Koran. I prayed that they would come to me early, in a dream, and give me the advantage I needed to kick the other parents’ asses in the First Day of School Competition and Teacher Brown Nose Contest.

Teachers and the other schooly people held the school supply list just above our reach and used it as the last weapon they had before we got back at them by sending our kids to them to take care of for free every single day for nine and a half months.

When my oldest son was in high school, the parents were handed the list of school supplies at orientation, which was the day before the first day of school. Orientation was the thing where they made all the kids and the parents squeeze into the high school all at the same time and get vital information about school that they could not get to you any other way. It wasn’t available before that day, it couldn’t be put on a Web site or posted on a large bulletin board outside the school building or mailed to the parents ahead of time. You had to show up at orientation to get everything you needed to know. Parents were known to camp out in the parking lot just to get a parking spot that would allow them to make the mad dash out of there at the end, so they could get to Staples before everyone else.

The teachers, I swear, would just sit back and wallow in the knowledge that grown adults were doing their bidding and that we were blocking fire lanes at the plaza to get the rare 2” Binder With Pocket in Front Cover Only, Four (4) Rings, Forest Green before they ran out.

“I have a master’s degree,” I heard one mom telling the Staples store manager, her voice cracking, her list shaking in her hands. It just didn’t seem fair that we could be such good parents and still have to send our kids to school missing required items.

There were elementary school years where, in an unexplained attempt to corner the crazy parent market (although, really, why would they want us?), Walmart would somehow get a hold of black market school supply lists and put them in a cardboard holder in the front of the store. The idea was to find your school and get the list and buy your stuff ahead of time. The only thing is, they were lists from previous years or they were just plain fake (Clue: There is no such things as a No. 8 pencil) or the slot for our school was empty. It was just a big tease, another cruel trick that made me wonder if the Walmart smiley face wasn’t actually a smirking face.

By the time we did get the school supply list and managed to negotiate the school supply aisles and got through our lists before there was a Who concert-like trampling accident and the police tape came out – again – the chances of us buying whatever was on the optional part of the list was slim to none. The teacher would often make an exclamation point laden plea to have each child bring in a box of Kleenex or some diaper wipes or antibacterial soap to donate to the classroom. Reading that would cause a little ripple of doubt whether I was smart to even send my child to public school, with all that communal snot, sweat and spit spraying all around, but then I would look at my cart full of composition notebooks, color coded folders, $200 Texas Instrument calculators and Trapper Keepers and think, “Hell, I don’t care what they pick up, I got my hands on this crap and it’s going into school in their backpacks.”

Don’t tell me you homeschool your kids because your children are light years ahead of their peers in math and science and your third grader just scored a 1500 on his SAT. You just can’t handle the school supplies, can you? You saw the size of that muthuh one year and turned to your husband and said, “You know, dear, I’m thinking I could probably teach the kids better myself.” And with the money you save on school supplies, you could hire Yo-Yo Ma to come in and teach them music.