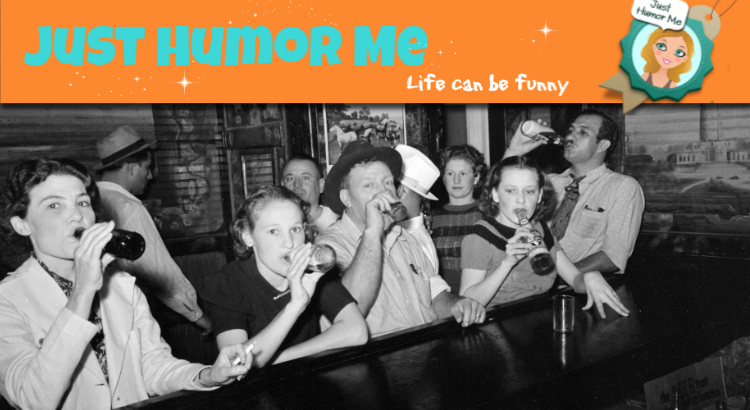 I’m not an alcoholic, but I play one on Facebook.

I don’t really drink all that much, but you’d never know it from my Facebook posts, which have people thinking that I have a wine glass Velcroed to my right hand (which would be awesome, but I digress). I know that by admitting this I’m crushing the hopes and dreams of all the people I went to school with who want to see their senior class president, who was nice but kind of a tight-ass, end up a loser. But let’s be honest: No one can drink as much as my Facebook pictures suggest. I would be on a liver transplant list and have broken veins all over my face.

So, no, I don’t have a drinking problem, but what I do have is a husband who loves to snap pictures of me with a drink in my hand. This has been going on for about three years now. We go out for breakfast and I order a grapefruit juice and his iPhone stays in his pocket. We go out to breakfast and I order a mimosa and – here it comes. Hey, look this way! Hold your drink up! That’s right, now take a sip! Post. Like. Where’s the martini glass and bloodshot eye emoji? It seems that the umbrella in my drink is a beacon that sends a signal directly to his phone camera alerting him that it’s picture time.

I do enjoy a nice glass of white wine on occasion. My doctor and all of my true friends tell me that’s OK and does not make me a problem drinker. This is a relief, because I used to worry about letting my drinking get out of hand. I have some pretty serious drinkers in my ancestry, but I’m Irish and you can’t really complain that the hand that’s dealt you has alcoholism when you’re also holding red hair and a pair of leprechauns.

Recently I stopped worrying about ever becoming a full-blown lush, because of two things: One, I’m getting to be the age where if I do become a drunk, I’d be the bar’s beloved mascot. Like the scruffy, neck-bandana-clad dog at the neighborhood pub, I’d be that old lady at the end of the bar who everyone tells their sad love stories to. I could think of worse retirements.

And two, there are worse things than relaxing with two glasses of chardonnay. Namely, two glasses of orange juice from concentrate, especially the kind made in South America, or two cans of Pepsi. And worst of all are non-alcoholic cocktails.

My husband and I were in Florida and I was approaching the point of a trip where you start to lose appreciation for all the vacationy things, and the thrill of partying all day and night is starting to fade. I had eaten too many restaurant dinners, I hadn’t had enough water to drink, I hadn’t taken any of my supplements, and I had definitely had too much coffee and wine.

We were going to spend the afternoon around the hotel pool, so we got all set up, picked two chaises with a little table in between. I unloaded my towel, book, sunscreen and sunglasses and went to the house-of-straw tiki hut to get us a couple of drinks.

My husband said he wanted a margarita.

I was conflicted. I wanted a margarita. Who wouldn’t? We were in Florida in mid-November, sitting around a pool, it was 11 in the morning and we didn’t have a thing to do for six hours. But I decided to get a virgin margarita instead. My thinking was that I would get all the social and psychological benefits of having a cocktail, without the stone-cold reality of drinking tequila before noon. My husband could take the obligatory Facebook picture of me with a drink in my hand, and my reputation as an aging happy-go-lucky party girl would be intact.

Here’s the problem with that: At the bottom of that mocktail glass is the sober realization that you just drank your body weight in sugar, salt and artificial additives, and you can’t rely on the tequila to put a nice fuzzy glow around  how fat and cancerous you’re getting.

At least after two real cocktails, you don’t care that you are headed down a path of self-destruction, because you have a mystical insight into the real meaning of life and it does not include the everyday problems of what you put into that body of yours. Without the alcohol, you’re just a fat tourist with blueish legs at the pool pouring artificial ingredients into your mouth. Your future is no better and you’ve added clear headed and depressed to the mix.

I have quite a few friends who don’t drink at all. It’s no surprise that they are the classiest of my friends. And you don’t see them drinking Shirley Temples or fake margaritas. Because the only useful thing about the flavor of a cocktail is the knowledge that at least one of the ingredients is going to make you forget that your upper thighs haven’t seen the sun in more than a year. Drinking a glass of something that tastes like a margarita is about as pointless as that bathing suit you’re wearing.