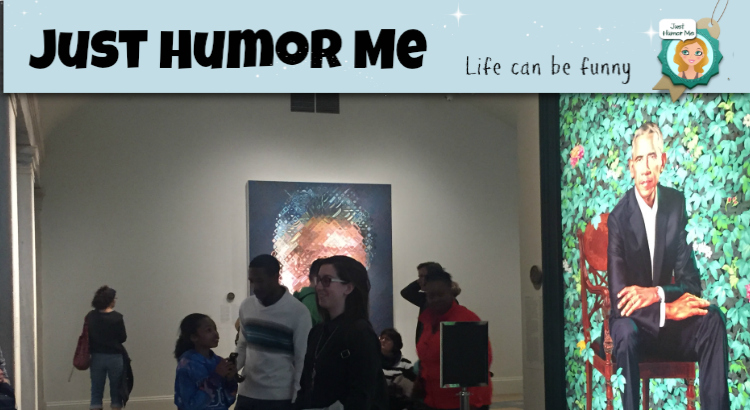 You know someone’s had a bad day when the white lady is crying alone in front of the Obama portrait on the anniversary of Martin Luther King Jr.’s assassination.

It wasn’t the first time I had gotten emotional about 44 and it certainly wasn’t the first time I had cried in a museum. The Pulitzer Prize winning photographs at the Newseum have reduced me to a puddle of mascara and snot. And I just keep going back. And again messes are made, authorities are summoned, and warnings are issued. It’s her. Cryface McBlubber at 3 o’clock, just left Tim Russert’s Office and is heading into First Dogs. Could be trouble. Follow the Kleenex trail.

The National Portrait Gallery, though, seems to go out of its way to play with sensitive types like me. Described as “an historic art museum portraying people of remarkable character and achievement,” it’s actually a very troubling place for emotional people. To get to Obama’s celebrated portrait, you have to walk through two exhibits: “The Struggle for Justice,” showcasing Dr. King, Elizabeth Cady Stanton and others  “who worked to achieve civil rights for disenfranchised or marginalized groups;” and “The Sweat of Their Face,” portraits of American laborers. If you think you have a bad life under current circumstances now, by the time you are looking into Barack Obama’s plant-encrusted face, you will want to walk straight to the nearest hospital and donate all your organs.

And while I wasn’t feeling sorry for myself, I was having a very bad day. The previous 24 hours had been an emotional rollercoaster for me. I hadn’t had much sleep. I had lost my wallet upon arriving at my hotel the night before, which had set me on a course of ups and downs where I was alternately inspired by how beautiful people can be and disappointed in how shitty people who work for companies can be. Standing at the hotel desk, unable to locate my wallet, I was helped by two wonderful young hotel desk clerks, who sprung into action, making calls and filing claims with the airline and the airport. Equally helpful was my son, who came from his home a half mile away to my rescue with his credit card and sense of humor.  And his comedic timing was impeccable. At the height of my frenzy, my heart pounding out of my chest and my eyeballs bulging, my purse and my carry-on tote bag emptied on the hotel lobby floor — receipts, sunglasses, earphones, books, puzzles, chargers . . . oh so many chargers . . . a banana, all strewn on the floor while I crouched over the pile, willing my wallet to miraculously appear, my mind is racing . . . how could my wallet not be in my Michelle Obama tote bag? It’s where I always keep it on trips. How could it not be protected by Michelle’s silhouette and quote “There is NO LIMIT to what we as WOMEN can accomplish.” Yeah, that’s all just a bunch of bullshit, Michelle. No help. You’re no help right now.  It was at this point that my son texted me: “I’m on my way with — OH MY GOD MY WALLET IS GONE TOO! jk”

The next morning I spent hours on the phone trying to weave through the bureaucracy that happens when you lose your ID and money sources while traveling. [Faith in humanity = negative numbers. Also I swear I’m going to go live in a cabin in the woods and give the finger to societal trappings.] By afternoon I had my wallet back, returned to me by a cab driver who found it and remembered me as “a nice lady.” [Mood = I love everyone and I’ll need those societal trappings because I want to give money to every person on earth.] It was in that mood that I decided to go see the Obama portrait.

The Lyft driver who took me to the gallery got lost several times, made at least one illegal turn and didn’t know how to use the driver app properly, so the trip wasn’t being logged and we were, in essence, just driving around DC in squiggly lines.  I was hyper-aware of my fragility. I sat back there focused on my breathing, just waiting for the next thing to happen and wondering how I would handle it. I felt like a porcelain vase in 100 pieces, which had been reconstructed and was being held together by hair tape, and a Tiger Cub Scout troop had decided to use it to play soccer. Next to me on the back seat of the Lyft was a baby car seat.[Goal = Just hold it together, Diane. Remember the car seat days? Now imagine you had to get a sitter so you could work a side job in ride-sharing.] “This is my first day,” the driver said, apology and mortification burning in her eyes. I sympathetically wished her the best, told her “you’ll get the hang of this!” and got out of the car, eight blocks from the gallery. I walked directly into a wind tunnel that blew dirt in my eyes and nearly pulled the hair from my head.

I made it to the gallery, windswept hair (not in the sexy way. At. All.), red eyes, tired feet, and I knew my emotional state was going to be a risk to be reckoned with. Just walking into a historic Smithsonian building puts me in a state of awe. Who am I kidding? I get emotional walking into any building that’s pre-Mid-Century modern. And this place had columns and mosaic tile and a dome ceiling and a courtyard with fountains.  I made my way through the gallery, through the marginalized groups, the disenfranchised people, the Civil Rights icons, the laborers, the workers, and tottered into the line of people waiting their turn to take unobstructed pictures in front of Obama’s portrait.

It’s a beautiful painting. So rich, it seems to be almost layered in detail. His face is as serious as I’ve ever seen it. Not mad-serious like when he muttered to Putin to mind his own пчелиный воск, not exasperated-serious like when he is paternally chastising Sasha, Bo or Donald Trump. Serious as in, “I did a lot of stuff and I hope I made things better and I hope I made you proud. And now I’m going to change the world in other ways, because we have a lot of work to do. But first, if you don’t mind, I’m going to sit here in this field of greenery and flowers that symbolize my life.”

So excuse the living heck out of me if I started to cry when I got up there and got to look at it close up. Crying in a museum is one thing, but when you’re by yourself, it’s doubly pathetic. I was prepared to politely turn down offers from the couple behind me to take my picture in front of the portrait, which is what everyone else was doing for people in line. But no one offered. No one was even making eye contact with me. Besides, it really wasn’t the photograph that I was after. As I heard a young mom tell her son in an art museum once when he asked why she wasn’t taking a picture of the painting she had come to see, “I just want to take it in with my eyes first.”

I took it in with my eyes and then I snapped a photo. Then I walked up to the docent and sniffing, said, “You may have heard of me from your colleagues at the Newseum. I need to make an apology. Now where’e Michelle?” 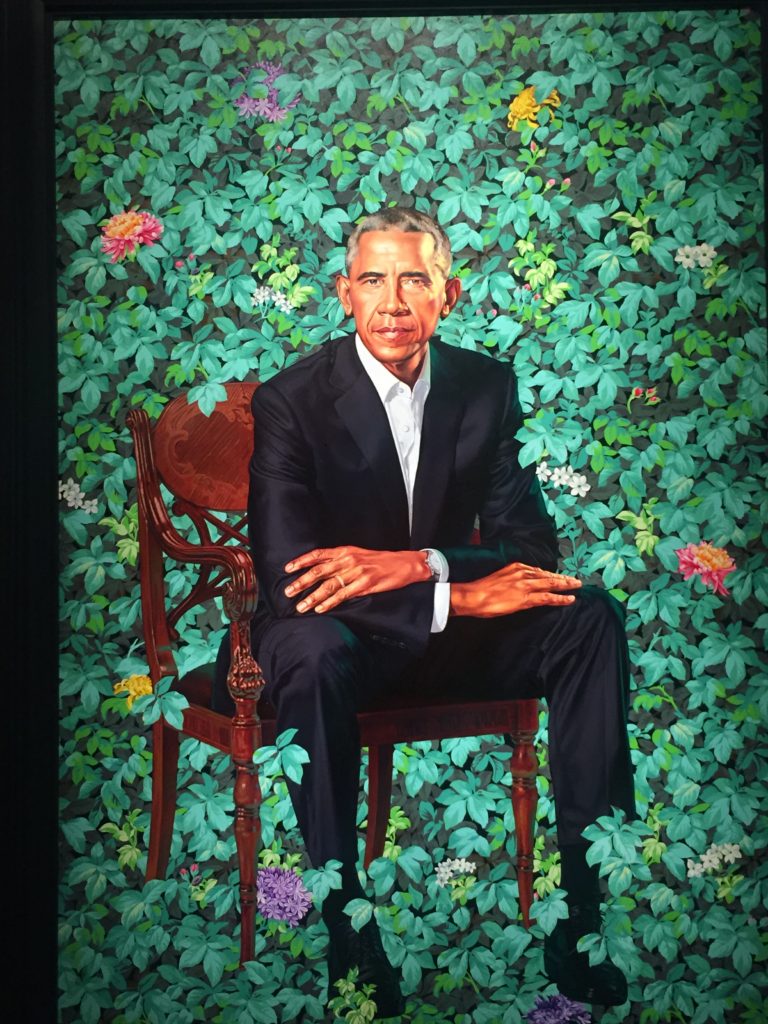 Diane Laney Fitzpatrick has been writing Just Humor Me for more than ten years.  Feel free to scroll around and read more, like this one from 2009 about why Barack Obama is bad news for husbands everywhere.  If you’d like to get an occasional email reminder of Diane’s writing, subscribe to her newsletter here.