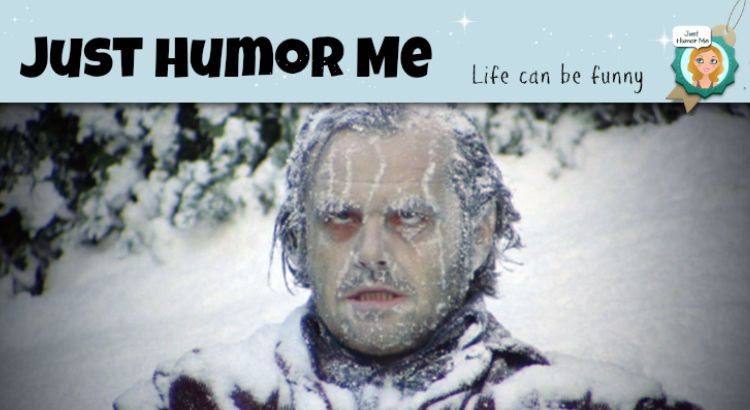 They’re calling it the Deep Freeze of 2019. I’m calling it Okay So Our Mailman is Purple Now.  I’m not going to rattle off the highs and lows, talk about low pressure zones in the Arctic, or mention what a polar vortex is. If you want to hear that, you’ll have to get your ass over here to my house and be in the kitchen for my husband’s quarter-hourly reports.

“It’s eight in Lexington,” he said yesterday, apropos of nothing. We were sitting at our tiny kitchen table pretending to read The Economist and old Winston Churchill speeches. In actuality, he was on  Fun Facts for Kids on Weather and I was playing Picture Cross and watching Dance Moms with the sound off. “And it’s going down to two  by the end of the week!”

“Mmmmmm,” I tried hard to express exactly how little interest I had in the weather in Kentucky and still use no more than one mouth sound.

Hearing how shitty the weather is this winter is just another test for me; a test of my new life resolution; a resolution I started in December because I was starting a new life; a new life in a new place; and that place has winter out the ass.

“I have decided that this will be a ridiculously amazing year” proclaimed a cheery pink screen saver I carefully placed on my laptop on or about mid October. I was still living in San Francisco and was mentally preparing myself to return to Ohio winters. The idea was to be greeted by an inspirational vow that would keep me from being one of those complainy old people who constantly talk about the weather.  I customized it.

“In 2019 I will not complain about:” said the text on top of the femmy pink floral background. I listed some pretentious BS about other people’s driving skills, wi-fi reliability, and how lucky I am to be able to fly across the country on an airplane without being rich or sucked into space.

And then I added one more promise about which to not complain:

“– how cold/hot/humid/dry it is or about the weather at all.”

That might have been over-ambitious. I mean, I’m trying. But it’s not easy with the white Al Roker over here, going on and on about the 10-day forecast, anenometer readings, wind chill and cold snap speeds.

Before this current state of nasty weather affairs, he was getting a little too much pleasure out of his new set of vocabulary words. Before we were even equipped to handle winter weather physically, he had the language down.

“What we’ve got here is what they call a wintry mix!” my husband said enthusiastically. We were driving to the appliance store to look at new stoves.

“I don’t think so,” I muffled from behind the thigh-high Halloween witch sock I had wrapped around my lower face. I couldn’t find the box of scarves and mittens that hadn’t been unpacked from three moves ago. “This is just flat-out snow.”

Did you know there is a whole set of Scottish words about the different ways that precipitation comes down to the earth? There are. But he was fixated on the all-American wintry mix. It had such a nice ring to it. He had heard talk of the wintry mix and he liked the idea of it. Besides sounding like a delicious holiday cocktail, it went out of its way to be inclusive. Snow? You’re in. Sleet? You too. Hail, but not a hundred percent sure it’s real hail? Check. Freezing rain, blizzard?  Regular rain that is sideways and chilly to the point of being an asshole? You’re all  included. Everything is welcome under the big, lazy Wintry Mix tent!

“Look. It’s starting to accumulate,” I said, hating to burst his bubble, but it was so obvious. “You could form a snowman or a ball out of it. You could build a fort with it. That makes it definitely in the category of straight-up snow.”

And then we did have an authentic wintry mix. (It was only a matter of time. We’re living in freaking Cleveland.) A couple days later I was at the living room window.

“Mmmmm, no, that looks more like a shurl to me.”